Always something to explore

To get an understanding of the main points in this case, we’ve observed the area, interviewed users and researched different city planning approaches. Based on our findings it is abundantly clear that the area under the bridge is currently a no-space area. People are currently only using the area for fishing at the harbor or as a way to get from A to B. Generally, our data indicates that users have a very negative association with the place, like it being unsafe and shady. Therefore, we came up with the idea of creating a step-by-step on how to create a space out of this no space area.
Creative playground is an implementation strategy with a focus on organic city planning. The first implementation step is to create a place for artists to express themselves, while inviting the local community to join them in creating this place, thus creating a feeling of ownership and community associated with the area. This implementation process is a mean to be on-going, where artists invite the local into workshops and then create collaborate art pieces in the area.
When the space has been created, it is meant to be used as an ongoing case study where the people’s behavior and usages of the area are observed, so that in step 2 the area can be adapted according to the usage of the area.

The starting point of the project work was visiting the place itself and meeting the case partner for further details on the problematic territory. The project members explored the place on their own in order to come up with different ideas. We decided to continue with a qualitative research by conducting several interviews. The point was to get insight and an overview of how to potentially develop the area in order to attract more citizens to spend time or pass by the place (flow). Our target group for the interviews were mainly people living in Aalborg and Nørresundby.Therefore, we spent time observing people’s actions such as where they chose to walk (left or right side of the bridge, under the bridge and access points to the site) – we would then stop to interview them (Appendix A).

To approach the overall problem from a new and more abstract perspective the group used the sandbox exercise that was presented to us during the workshop – this was done in order to spark inspiration and as a way to brainstorm various ideas by acting it out with various objects in the sand. 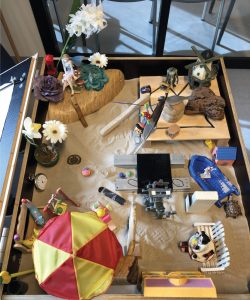 We decided to approach the exercise a bit differently by avoiding sharing our initial thoughts while placing the figures; we did this to allow each member to fully form their own interpretation, and then collect our ideas and thoughts and compare them afterwards. So, after everyone had placed and arranged their figures, one person would start drawing and taking notes to describe their individual understanding of the canvas, while the rest would activate their subconscious thoughts while moving and rearranging the figures. While doing so they would also formulate their own ideas and interpretations. Next step was to collect and share our thoughts, a few interesting facts emerged:

We found that we all started to place the figures in a way to map out the different facilities to include as part of the bridge park area. We all imagined the sandbox to be a sort of representation of how we wanted the area to be.
We found that although a lot of the figures would bring the same thoughts to mind, a few of them had provoked quite different interpretations. A notable example was the toy where the user was supposed to move a wooden block through a certain path.

We each had different interpretations:
o An interactive installation, something that children and playful minds could interact with

o A way to lure people to the area, specifically through an ARG (Alternative Reality Game) where clues would be scattered around town all pointing towards the area

o A way to connect the different facilities and art installations by guiding people from one piece to the next and potentially tell a coherent story.

Before the sandbox exercise, we already had an idea about using art installments, as interactive facilities and allow people to contribute, and add their own art, but we were still missing an overarching theme for the place – something that would bring the place together. The very act of viewing something from different angles, became an interesting activity to try to implement – we landed on this approach:

The overarching theme would be the different means and ways of exploring and contributing playfully and/or artistically – a creative playground. By means of exploring, we weren’t so much focusing on senses but rather that each installation could be experienced or created with three different approaches in mind – by day, by night and virtually.

In daylight [The Day Experience]; ordinary art, paintings, statues, physical facilities – even a skating ramp could fall into this category – everything that can be seen in daytime with the naked eye.

In the night / the dark [The Night Experience]; here the daylight installations could be expanded by using light – this could be achieved in different ways; using LED that would only turn on by night or luminescent paint that would only be visible when illuminated by specific light sources.

Digital experience AR [The Virtual Experience]; here the visual elements would be completely hidden, and would only show when seeing the piece through a device with the necessary software to read and print the digital elements on top of the physical art piece, thereby expanding the art canvas by eliminating the physical limitations. This approach would allow artist to provide 3 layers to their creation or even allow them to build art pieces in collaboration with other artist, a painter and a digital designer could go together and form a piece that could be simplistic and beautiful by day, like a nice landscape, but then turn it into a battlefield through the virtual experience by adding soldiers and explosions to the landscape.
(picture 1 and 2: sandbox exercise)

At this point in the design process we were already very focused on one main concept path, so to explore other ideas we started sorting all the gathered data into user statements, using color coding and organized it in an Affinity map. The Affinity map gave us a visual overview of the Interviewees current pain points in relation to the area under the bridge. By this point, we observed a lot of common issues such as lack of coziness, dirty and gray environment and a creepy atmosphere. Some of the common issues included the lack of people and places to “hang out”. Besides that, the Affinity map helped us pinpoint what jobs the users currently are using the area for – mainly as a pathway and as a fishing spots. 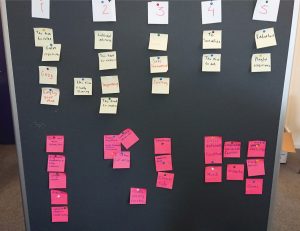 Thereafter, we approached these issues by exploring other concept ideas than just the one we created during the sandbox exercise. We brainstormed ideas based on our data from the Affinity map. By doing so, we created 5 innovation tracks outlining the problem and possible solution to it:

To further explore one of our five different innovation tracks, we held a meeting with seven artists, with different backgrounds and platforms. This was to get insight and explore this niche segment as a possibility for a target segment for a concept track. From the meeting it became clear that there was value for the artist, in just sitting together conversing about different topics. There seems to be a common interest between artists and Aalborg Kommune in creating art in the city, where the art is exposed to the general population. But even though Aalborg Kommune emphasizes cultural development in the city, the projects around the city usually gets somewhat limited in creativity. So, what is missing is a creative space where artists can express themselves, meet up,  a place to put their artistic mark on the city.

From our meeting with the artists and the meeting with the case partners, we started to merge some our innovation tracks, and video sketching some of our concept ideas (the videos are listed below). The videos and our meetings lead our focus more in the direction on how to solve the artist segments pain point while solving the case partners problem as well (there being little to no people using the area under the bridge). This new starting point, data and the video sketching lead us to the concept track of creating a base, a guide so to speak, to further develop the area under the bridge, as a permanent solution to both artists and case partners pain points.

Sketches of other concept tracks

This concept track mainly focussed on we ways to utilize each “room” to promote a specific state of mind. We did however realize that due to the location and traffic, it would be very difficult to do so – mainly to create a room that would make people relax and calm, due to traffic noise, the cold and windy environment.

In this concept track we explored different ideas to create a space, where people would want to hang out together. This did however not solve the current problem with the area, since we found that businesses didn’t have any desire to invest in the area.

The concept Playful Experience focus’ is to create a space with all sorts of interactive facilities. It is a playground for kids and adults alike, where AR is a let aspekt of the experience on the playground.