How can we transform the space underneath the Limfjords bridge from an insecure “non-space” which is not used at all into a space which is used not only by the local community but also by visitors?
Our project in cooperation with Aalborg Kommune is to create a concept that helps to revitalize the space. The concept should be realizable in the near future since it will be only temporary for about four to five years. It is important to use the advantages of the space, e.g. view on the waterfront.
The goal of the project is to create a space where the community is spending and enjoying its time. The space should raise the attractiveness of Norresundby as a residence area. It is crucial that the space is considered as a safe space at any time during the day.

In the final video, we’ve decided on a structure in which we briefly explain the problem assigned to us and then we focus on developing the solution with the help of pain points identified during the field trip. While developing the perfect solution to the problem we used different methods and processes which are also explained in the video. Our idea is to help visitors and local people enjoy the place in the best way possible. As we plan to transform the area underneath the bridge into a more friendly and cozy space.

We have developed a solution while keeping all the stakeholders into consideration. Through our concept, we plan to create an identity for the area and thereby increase the flow of the people by creating a customized colored path that will guide them through the different rooms. Furthermore, we’ve created a mirror maze and a seating area with different artwork and sculptures that well be lighted at night, to intrigue the community as well as visitors to check out the place.

Field trip day
Audio file recording instead of video interviews – reasons: authentic behavior of interview partner, videotaping – might be uncomfortable for many people when people approach them with a camera
→ getting real, authentic answers in a “normal” conversation environment.
Decision to talk to the users directly, people who live close by and use the broader area rather than talk to people in town who are not affected by the changes due to the fact that they are not the main users
splitting up in two teams.
Jonas & Emily – interview session in Norresundby in the morning + observation.
Julian, Alind & Nicklas – interview session in Norresundby in the afternoon, interview with pedestrians and local ship-building club + observation

Analysis and deeper understanding of the problem – through Sandbox method.
Using affinity diagram to collect knowledge from interviews as well as the observations and potential ideas. Brainstorm on the base of the affinity diagram in order to identify the 5 innovation tracks.

Come up with 5 innovation tracks to narrow down the problem and the direction of the concept.
The last innovation track called “time” we chose not to include in the pitch. 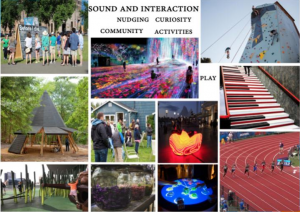 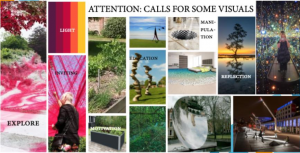 Introduction to Adobe premiere pro.
Discussing and working on our final concept according to the feedback from the case partner meeting. Prototyping our ideas to come up with a final concept, followed by prototyping different video sketches i order to determine the feasibility of the concept/ideas.

Finishing work with the rough video sketches and determining the best solution to communicate our concept to the case partner. Followed by agreeing on the time limit, the content to be included and in which order to make a complete video presentation. We also agreed on having a structure that would first introduce the case problem itself, followed by explaining/showing the methods that we used to gather information and analyzing the problem, and then having our solution to the at the end of the video visualized with a 3D sketch. We chose this particular order of content for our final video as well feel that this might be the perfect way to convey our result in the easiest way possible.
After the process of agreeing on the structure and the way we wanted to communicate our solution to the case problem, we started working on the final video sketch.

Finishing off the final concept video sketch with some redo to improve the quality and the storyline of the video. Followed by working on the other half of the final video by recording and editing the script. We also wrote the description for the final video and tie up any loose ends by updating the website by uploading pictures of the process, moodboards, and the concept video sketch & its description etc.

Sketch Concept: Daily Commuter on the bridge
It is a person who regularly uses the bridge to go to work from Norresundby to Aalborg. Often due to bad weather, he ends up in the area under the bridge to protect himself from the rain but he doesn’t really like his stay at that place as it seems very dark and uninviting. Moreover, he feels like space is not being utilized to its full potential and during that time he thinks of different concepts that can make the place more interesting.

Sketch Concept: Local guy realize the potential of the bridge
It’s a local person walking around and under the the Limfjord bridge on the Nørresundby side. What he experiences is a desolate and scary place that is very ill used which also feels very remote from the rest of the Nørresundby harbor front. As he walks around he starts to see the potential of the place and instinctively he starts to think of different ideas to improve the place.

Sketch Concept: The cinematographic one…
This video sketch seeks to show the contrast fullness of Norresundby’s pier. Both East and West, parts of it look stunning and modern. However, it is disconnected by the bridge area (The ‘non-space’). Details show how unattractive and detached the place is. Then the solution is presented, that the problem consists of flow and stay aspects and it could be solved by adding paths, public areas and an infinity mirror maze.

Sketch Concept: A guy passes by underneath the bridge and is surprised by a colored path…
This stop motion sketch video illustrates the emotional impact our concept will have on the stakeholders living/ and or pass by the area underneath the bridge. The element of surprise hits our guy as he is used to pass by this area without really noticing what the area looks like. He sees the path and is lead to the mirror maze, and when walking around inside the mirror maze, someone else sees him and is wondering what is going on. He finds himself to be intrigued and comes closer to check out what is going on.

Sketch Concept:Going from depressed to happy
A guy is walking home from work, tired, depressed, with his head down and suddenly he notices the path, which he follows without thinking about it. Suddenly he sees this building. Is it a house? Does someone really live here? he’s confused, but interested, and goes to find out that it’s a maze with mirrors. Because he can see himself several times, and after going through it, he’s in a better mood. He’s forgotten what he was depressed about in the first place.