This group worked with OpdagDanmark, which is an app/website that shows a map over different places people might see and visit in Denmark. They also do top 10 lists over places, for example top 10 bakeries in Denmark.

Here you’ll find the final concept video that the group produced. The video shows a tourist arriving in Denmark, discovering the app, and then creating an account which he personalises to his interests. He uses the app to find a place to visit (Aalborg Zoo) by getting inspiration from other users recommendations. He also finds a place to eat lunch based on certain search criteria that he enters, as well as his interests that he entered when making his account. 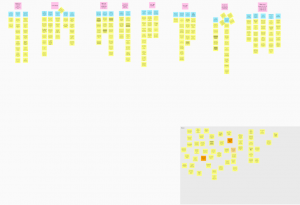 4th Deliverable: ‘How Might We’ – Questions and Ideation Framework

Here are our three initial video sketches, along with short  concept descriptions.

Video 1: Inspiration from other users

The second video sketch is focused on the aspect of personalization. Our approach was centered on the key features that can be potentially used to make the app more personalized to the user preference with easy to use, quick and straightforward interface. It is meant to convey the ease through which a user can create his/her profile with different categories which they can define for themselves while searching for recommendations for  things to do through the app. The app then recommends and prompts suggestions based on the user’s background and preferences.