GeoGuide is a geolocation app that allows business customers to create and maintain their own customized maps to provide their clients with an experience tailored to their business. Combine is characterized by providing a cheaper app option which is template-based with module add-ons such as quiz, finger codes, web maps and more. Currently, GeoGuide´s customer base is mainly comprised of national and nature parks, all using the app to guide their visitors around the park’s sights and sounds hiking routes.

Combine brought up the challenge to create new features or modules to provide its services to a wider spectrum of business partners and improve their scalability prospects. Additionally, our group was asked to focus on the “routes” module of the app and to look into different options that would allow Combine to reach their scalability goal.

This concept is a system that lets the costumer build and customize their indoor or smaller outdoor area, like an amusement park, via a mapping module. It functions as a digital platform with a drag-and-drop system for creating maps. The maps are built from boxes (resembling rooms), stairs, doors and different icons for points of interest, finger codes, QR codes and much more. To navigate the maps, users can be equipped with RFID tags through, e.g., bracelets which makes navigation more accurate for indoor areas.

Segments of storytelling can be implemented to further enhance the experience and engagement of the user when exploring the maps and routes within a map. Those features let the user engage in and explore history, nature, fiction etc. through the eyes of a specific character in a role play-like experience.

This concept could improve the global scalability and solve the issue of having to buy expensive indoor maps from third party companies. It could also greatly improve the user experience and engagement of navigating with a GeoGuide system.

Our fieldwork process began by going on a field trip to Thy National Park. There we conducted an interview with Bo the project manager of the park and customer of GeoGuide. During the interview, we gained an inside perspective to what elements the consumer likes and what elements that he felt was missing or needed improvement. After the meeting with Bo, we went to Klitmøller in the National Park to try out the mobile app. To test the application, we chose a random route near Klitmøller, which gave us some interesting results and many insights about how the app works.

Based on our findings from the interview with the project manager of Thy National Park and from testing the Geoguide app we tried to understand the needs of the app customers and end-users. Throughout the U-CrAc workshop, we learned many tools which helped us to stress pain points, needs and generate new ideas.

One of those tools was the Sandbox method. We used various toys and items in a sandbox to identify more subjects and possible needs. During the ideation process, we talked a lot about what a customer and an end-user might experience while using the app. Every figure in the playground represented something, for example, a plastic toy house represented culture, a special object or an achievement. We constantly moved around the objects in the sandbox to get more insights and tried to see every object in different angles and record that on a piece of paper. As a result, we have generated many new ideas which weren’t obvious in the beginning. 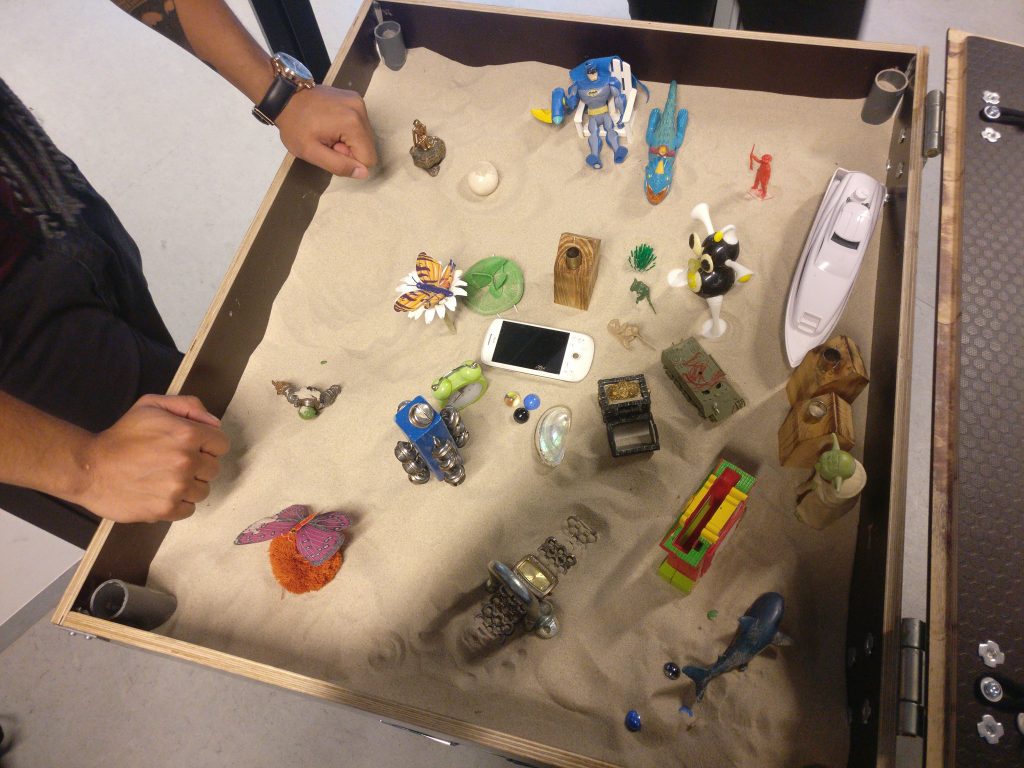 After the ideation phase, we extracted all the ideas from the sandbox paper sketch. We wrote each idea on a post-it and grouped them according to the Affinity Diagram method. We ended up with eight clusters and narrowed it down to five main concepts: Games, “Indoor”, Backend service system, Storytelling, and User-driven content. 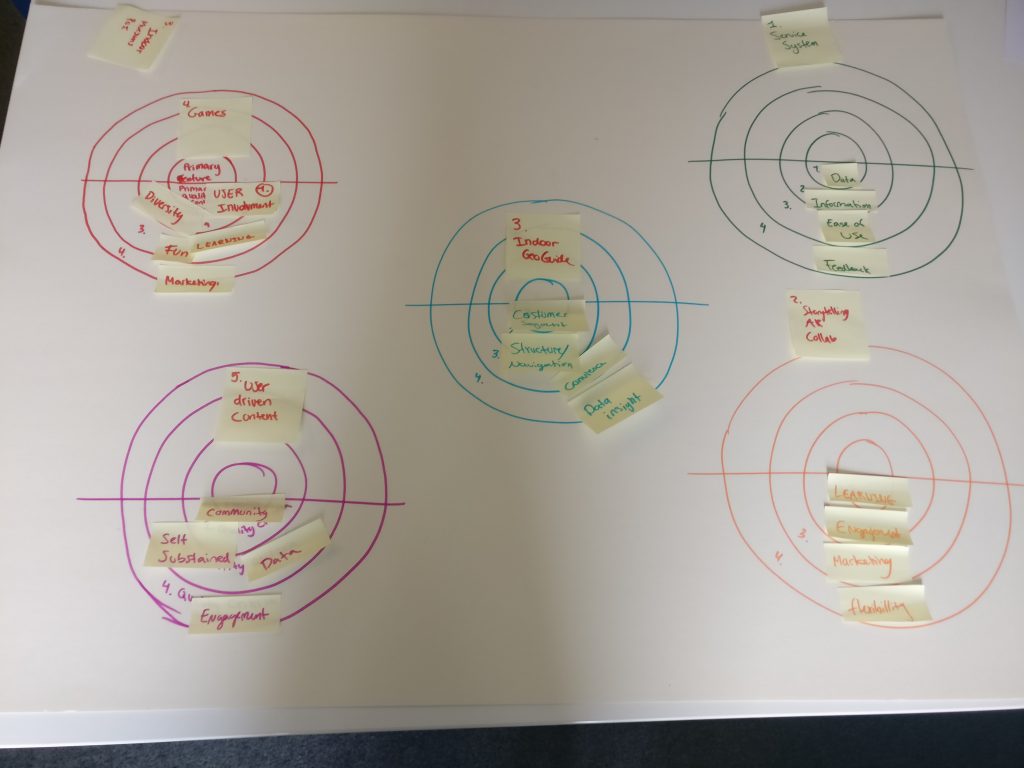 During our first case partner meeting we presented our five concepts to Combine and in collaboration with them narrowed the concepts down to the two we where to focus and further develop. The first one was the “indoor” concept and the second on was a combination of games and storytelling, with the focus being on deconstruction the traditional route function and add an element of exploration and storytelling to the function.

We now had our overall concepts, the next step was to make the concepts into more concrete ideas.

This concept is about also making the GeoGuide system available for indoor use as well as smaller outdoor spaces like amusement parks, schoolyards, etc. As seen in the video, the concept is about making it possible for the customer to create indoor maps via an Indoor Map Module including a drag-and-drop platform. With this module, costumers will be able to map out all sorts of smaller areas by themselves with an intuitive tool. In case the customers have Cad plans of their buildings, those could be used to facilitate even more the map creation.  Additionally,  the users themselves will be equipped with RFID tags to enhance digital navigation. The idea is to be able to locate the users in the indoor space accurately enough to guide them throughout the different rooms.

This video was created by using a combination stop motion animations of paper cutouts and recordings on a green screen.

This concept revolves around the idea of re-imagining the purpose of GeoGuide’s routes. Instead of just following a static line or path, the app will function as a radar. The radar guides the user towards points of interest through small visual queues. When the user is looking and moving towards a point of interest the radar intensifies, implicating that the user is on the right track. This way the user is experiencing the routes and points of interest in a more exploratory and engaging way.

The video was created by using a combination of a green screen for recordings and photoshopped images.

The third concept is about involving the user through storytelling and role play. When walking a route the user has the option of entering the story of another person. It could be a historical person like a world war 2 soldier or nurse, or a fictive person with a fictive story. The user then follows the storyline of their chosen character, engaging in small stories in the form of both AR and written text activated by finger codes. By engaging in these stories the user becomes part of a story within the routes of the area.