Frontsale.one is an Instagram based selling platform where surplus clothing from the shops are sold.

The initial problems we saw with Frontsale.one were bound to three things; not enough content on the profile, not enough followers, and highly complicated service schematics for the business.

The service schematic for Frontsale.one on current time is shown underneath. 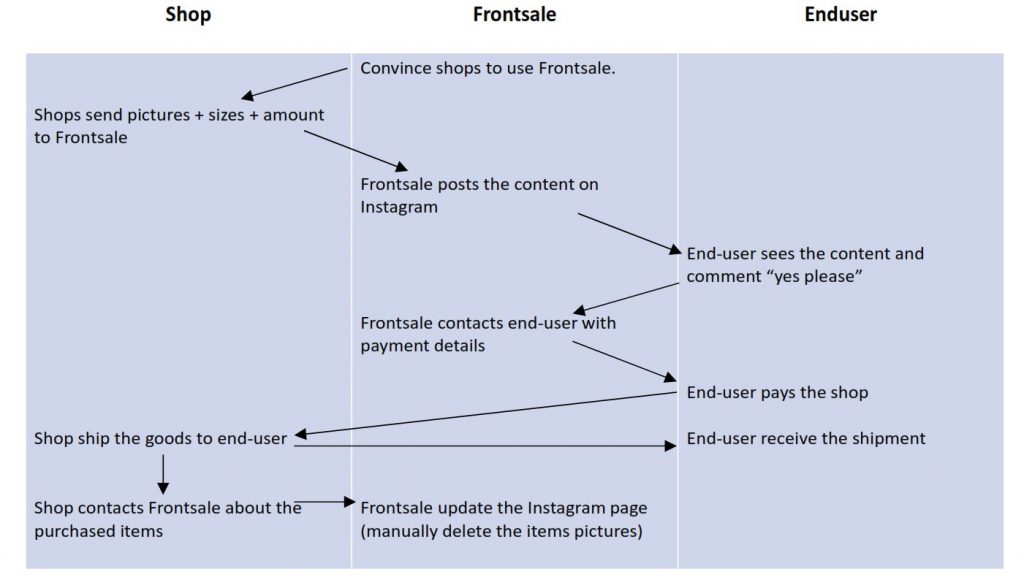 The Final concept video summarizes the contrast between the current situation of Frontsale with what we propose the future of Frontsale should be at the end of UCRAC project. The video first outlines the observations we took during the fieldwork. Then it emphasizes on the insights and Aha moments derived from those observations. The video then presents the current workings of Frontsale and after that, it focuses on the proposed solution. Finally, the video briefly highlights the proposed business model.

Introduction of project initial interview with stakeholder. We started to have a holistic view on understanding the project and we started analyzing the initial problems and possibilities.

Analyze the problem and possibilities of solution by brainstorming on whiteboard. We looked at what things we needed to investigate to get a bigger picture of the problem and field work. We wanted to look at shops’ problems and end user behavior. We developed the persona we wanted to target and based on that persona we derived some to dos we have to do for the next days.

We did fieldwork in order to market research for Frontsale. We split into 3 groups, two of which went to different stores in Aalborg and Aarhus, talking to shop owner and one group did online survey about buying patterns of the customers, targeting the end users for Frontsale. The group that went out in Aalborg ended up talking to 5 different stores. The Group who went to Arhaus interviewed 5 stores as well. Through the fieldwork we wanted to investigate whether or not surplus was a problem in local small stores, and if the Frontsale concept would be applicable to them. We had short conversations with the different stores, few of which were audio recorded for notes. (Some people declined to get recorded)

The group in charge of the survey did a google survey which they sent out to the potential target group. We had previously defined the target group as:

The target group was derived from the costumers of the shops that Frontsale currently cooperates with and the perceived end users of the concept.
The survey was sent out to 60 people from the perceived target group and was replied to by 15 people.
Out of the 60 people, 15 of these were existing followers of Frontsale on Instagram, 15 were Instagram users who commented on a photo on Frontsale posts, with the motivation to buy a product and the last 30 had been contacted via. Facebook.

The survey consisted of 16 questions, ranging from validation questions to questions regarding the problem statement.

During the morning lecture on the 19th, we played with the sandboxes. We started out by taking 30 minutes where we worked in silence, all picking out different artifacts and items that we placed in our sandbox. After we had agreed that we had all the items we needed, we were assigned different roles; 1 observer, 1 note-taker and 3 discussed. We discussed what the different items could represent and what the meaning of them could be in context to the case. We found many interesting observations that we all noted down to take on the idea generating phase later on. We talked about business partners, platforms and customer segments.

In the afternoon, we met up in our group room to discuss our findings from the day before. We started by writing down our own observations from the field work, on sticky notes. We then presented the observations to each other, and placed them on the table.

We created some quality criteria and evolved our innovation tracks from these:

From the insights and finding, we came up with 5 different innovation tracks, 2 of them were combined: 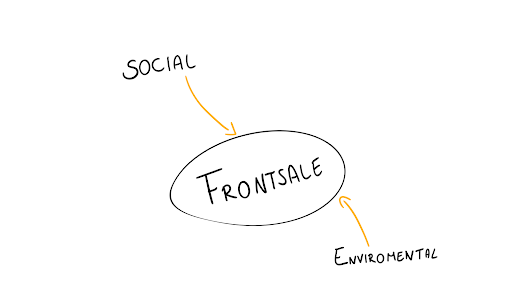 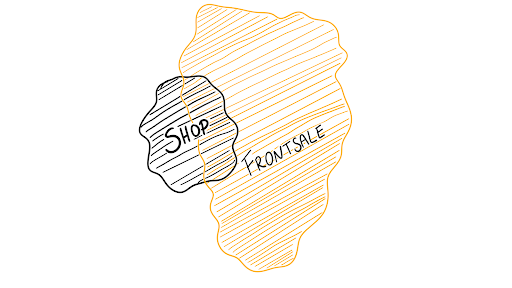 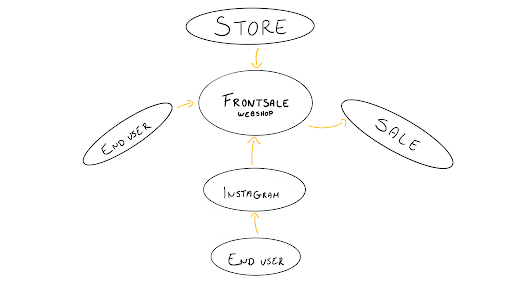 Platform where end users are directed through marketing platforms, like standard eCommerce shops 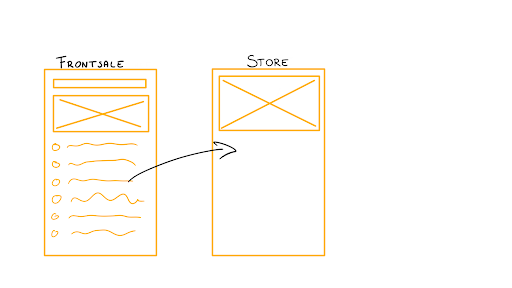 We had meeting with the stakeholder where we presented the process of the work until the point of innovation tracks.

Doing the presentation of the insight and the innovation tracks we got some input from the stakeholder. Thereby we got information about her fieldwork and her inputs to the future of the web platform we agreed to work on.

We agreed to work on a web-based platform that has some similarities with redbubble. Here we are going to work further with the concept of shops being able to create their own profile and upload products. It was Frontsale’s concern that it would become too complicated, and for us to come to an agreement that we make it possible for her to add content to the platform manually for smaller shops that do not have web-shops.

The web-shop allows Frontsale to advertise its content on more social-media pages and at some point being able to get money out of special advertising or custom premium offering for customers. This was Frontsale’s primary perspective at the beginning of the project.

Therefore, the “contract” between us and Frontsale ended up as a web-based solution to the further progression of the company, where we decided to focus mostly on innovation track standard eCommerce platform.

At first we had a tutorial on how to use Adobe Premiere. Then we started to brainstorm what the interface of our designed platform should look like, what functions should be there, and what should be shown in the video. We decided that the actual interface will not be shown in the video, only the overall concept is. We decided to make a stop motion movie using a stand scan with green-screen. We aimed to show the old concept of Frontsale at first, and then show the new concept afterwards to demonstrate the difference in efficiency and other advantages with the new concept. We used ourselves as actors, to practice and demonstrate how the video will be narrowed. Then we created a script that would help us track how the video will progress.

(see sketches at the end)

We cut out the paper elements we needed for the stop motion video – including people, words, arrows, artifacts etc. Then we just followed the script and got started with the actual video footage. The more challenging part was on the editing part, but luckily one of our group members had experience with Adobe Premiere, which made the process easier. We had some technical issues related to the name of the photos we imported in Premiere though. We decided to continue with the video editing, including the sound recording on Thursday.

We continue with the video editing. The sound of the video is recorded.

We decided to make stop motion movies, and of course we wanted to get an overview of the scenes, so we acted the scenes out in real life. Under this you can see some raw role-play of us doing so.

This sketch is about how the current interaction happens at Frontsale between the shop, Frontsale’s manager and end user:

This sketch is about how the future interaction will be at Frontsale between the shop, Frontsale’s manager and end user:

This sketch highlights the service schematic of Frontsale with proposed solution:

This is a stop motion sketch of current working of Frontsale:

This is a stop motion sketch of proposed working of Frontsale: